My First River Cruise Experience – Getting There and Paris

Châteaux, Rivers & Wine.  This is the theme of my first ever river cruise.  This came about because my mother really wanted to do this cruise and I was lucky enough to be able to tag along.

First the details:  This was on Viking River cruises, starting in Bordeaux cruising to Cadillac, Libourne, Bourg & Blaye, Pauillac, then back to Bordeaux.  In addition, we took the Pre-Cruise extension that included Paris, Orléans, the Loire Valley, and Tours before heading to Bordeaux to meet the Viking Longship Forseti.  We paid Viking to handle our flight arrangements, and all I can say about that is “lesson learned.”

Having never sailed a river cruise before, I was unused to the lack of planning required.  As you know, if you have read any of my previous reviews, I am a crazy planner so not having to do any of that for this cruise left me feeling a bit disconcerted and not in control.

So, without handling any of the travel planning, we began our journey in April.  Our flight was Charlotte to JFK, JFK to Paris.  I had never been through JFK before but since we had been checked through, I assumed we would be fine.  I was wrong.  We had a bit of a delay leaving Charlotte, we sat on the runway for almost an hour waiting for clearance, but after that the flight was uneventful.  I knew it would be tight to make our next flight but we should have been able to make it.  What I did not know about JFK is that we would be required to check in again at the Air France counter even though we already had boarding passes.  Then, we had to make it through security again.  Unfortunately, these couple of issued added up to us missing our flight to Paris.  We then had to wait to see if we would make it on to the next (and last) flight to Paris.

We did in fact make the last flight out, so I called Viking to let them know not to meet us at our original arrival time, but that we would be there a couple of hours late.  A long, but uneventful flight later, we landed in Paris, collected our bags and headed out to meet our Viking rep.  We were loaded into a comfortable minivan and off we went to our hotel, Le Méridien Etoile.

Check in was easy and quick and our rooms were ready immediately.  We headed upstairs to unload our luggage and rest a bit.  Which ended up being a good idea as the heavens opened.  It rained for a bit, but then right as we were ready to head to dinner, it stopped.  We had no real plan for dinner, but I did have a place in mind, I just wasn’t sure how far away it was.  And as luck would have it, it was right down the block!

If you read my post on Nice, you may know how much I love mussels.  Well Léon de Bruxelles is famous for their mussels so I knew when I saw them, I would have to try it.  I mean, can you really be better than sitting by the Med drinking Rosé?  Well, actually no.  But the mussels were still REALLY REALLY good!

And there were so many I could not finish all of them.  We all enjoyed our dinner tremendously and left fully satisfied.  I know it is technically a chain, but I would certainly go back anytime I am in Paris.  Service was great (and friendly!), prices were reasonable and the food (and wine) was outstanding!

Because of our delayed arrival in Paris, we did not have our day of sightseeing as planned, but we had one thing we didn’t want to miss, Bateaux-Mouches.

A river cruise down the Seine.  The cruise departs every 30 minutes so there really isn’t a need to pre-book tickets, unless its a holiday or event, or you want a dinner cruise.  We just wanted a lovely sunset-ish ride through Paris.  In all of my trips to this city, this was one thing I had never done and even though I’ve been there multiple times, this was certainly a new way to see the city I love!

The cruise was lovely and afterwards we caught a taxi back to our hotel.  We had a early morning pickup to begin our tour through the Loire Valley so after a quick Lillet Rouge & Tonic in the hotel lounge we all hit the sack (well, except I had to work still, but it’s a small price to pay to be able to work from anywhere!).

Up bright and early, we showered (yay!!) and headed down for breakfast.  I will tell you, I have had plenty of crappy hotel breakfasts and Le Méridien Etoile is not that.  Not that at all.  Breakfast was awesome and if anyone knows where to get that little jar of kiwi yogurt please let me know! 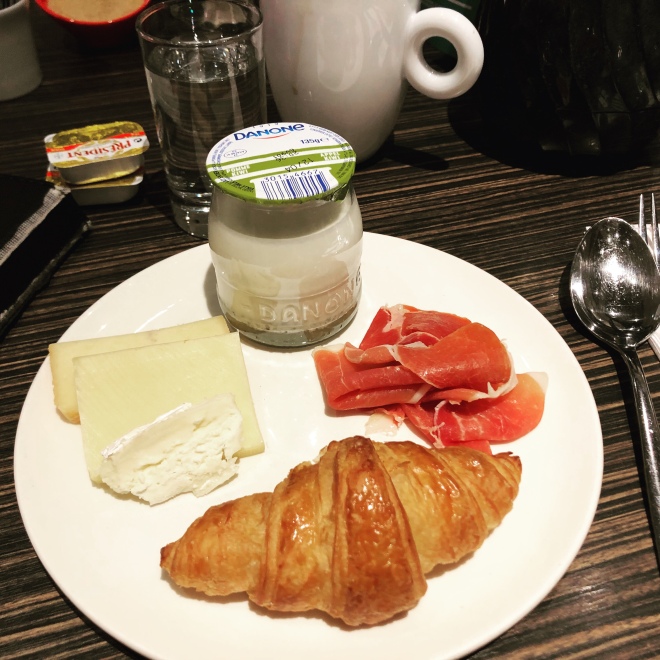 After breakfast and hotel check out, we handed over our luggage and were loaded onto a motorcoach to begin our tour.