Wow Airlines, A Week in London and a Day Trip to Paris! Part 1

Well, we are home from the surprise birthday trip to London.  I had hoped to be able to live blog the whole thing, but our wifi was spotty and with everything we ended up doing, there really wasn’t time to write if I also wanted to sleep at all!!

So now I can give you the day by day. Spoiler alert: all our days were awesome but you should keep reading anyway, it’s totally worth it!

So let’s start at the very beginning, I hear it’s the place to start! Wow Airlines was running a special on airfare from Baltimore to London’s Gatwick airport for $149 each way. Sounds incredible, maybe too good to be true…and it kinda is. After the base fare you then need to purchase your specific seat, and there are no freebies. The seats range from $7 each in the back third up to $40 each for the exit row and bulkhead seats with all the leg room. The fee is for each leg of the flight and since there is a mandatory stop in Iceland, you will be paying for two legs each way.  I purchased the $7 seats for myself and OD.  Also, I purchased an aisle seat and an window seat and left the dreaded middle seat empty.  This was a risk, but I was hoping no one would purchase that middle seat and we would have the whole row.  It was October and our flight wasn’t until January, so I knew we might have to give up one or the other to sit together, but I figured, “Hey, who goes to London in January?” And then we waited.  In the meantime, I booked flights from Charlotte to BWI with American Airlines.  I thought that would be the easy part! It ended up being the biggest hassle of the entire trip, but AA Customer Service did eventually make amends so even that just gets filed as a travelling hiccup.

Check in at Wow Airlines at BWI was an absolute piece of cake!  I had pre-filled in all of the required APIS information, I had already weighed my bags so all that remained was to see if anyone had booked the middle or if we had the whole row to ourselves.  The super awesome counter agent at BWI let us know that no one had booked that middle seat and we did indeed have the aisle seats to ourselves!  WIN!!  He also checked our flight back and saw that someone had booked the middle seat for our return leg, but there were a few empty rows available. A couple of clicks on his magic keyboard and we were once again the only two people on the three seat row.  Important note: He could not have done that if it had been an upgrade, unless we paid extra, but since the seats were the same price, it was no big deal and made us immediate fans of Wow Air.

Also, Wow does not serve food or drinks for free…at all.  Even water is extra.  Since I was already aware of this, we stopped at the airport newsstand and purchased a couple of bottles of water and some snacks, easy peasy.

Once on board, we settled in for our flight.  Seats were not terrible, plane was clean, attendants were friendly and professional and BONUS there were charging stations under every seat…no converter required!  So even though there is no in flight entertainment, you can bring your own and not worry about losing your charge midway through. 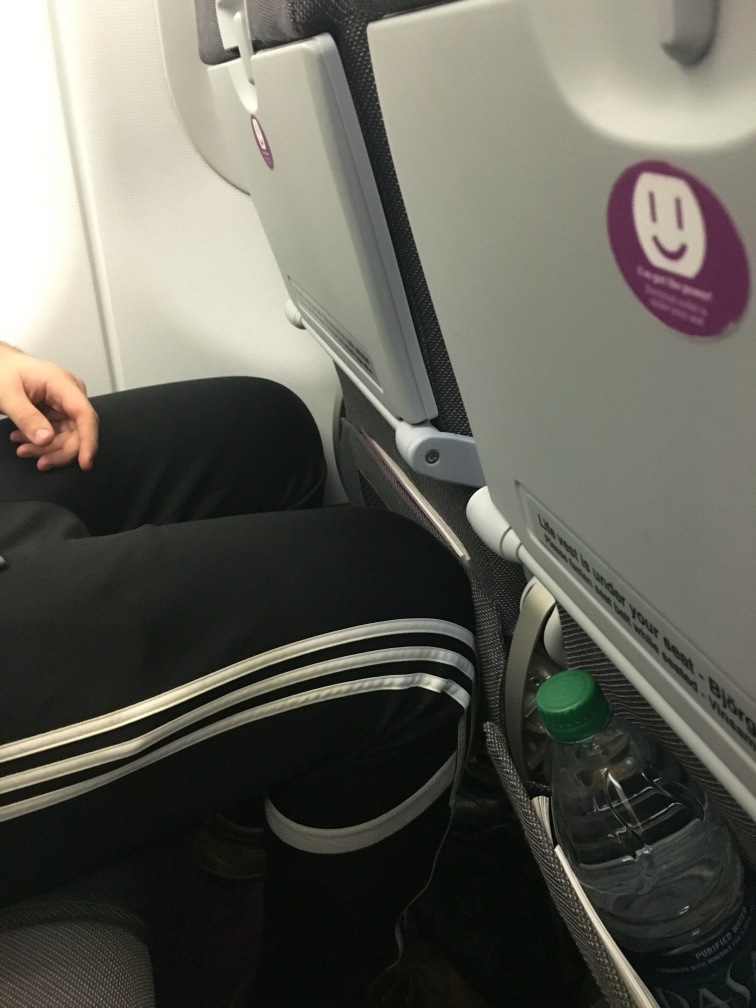 See the cute smiley face on the tray table?  That lets you know that you can plug in your stuff under the seat. 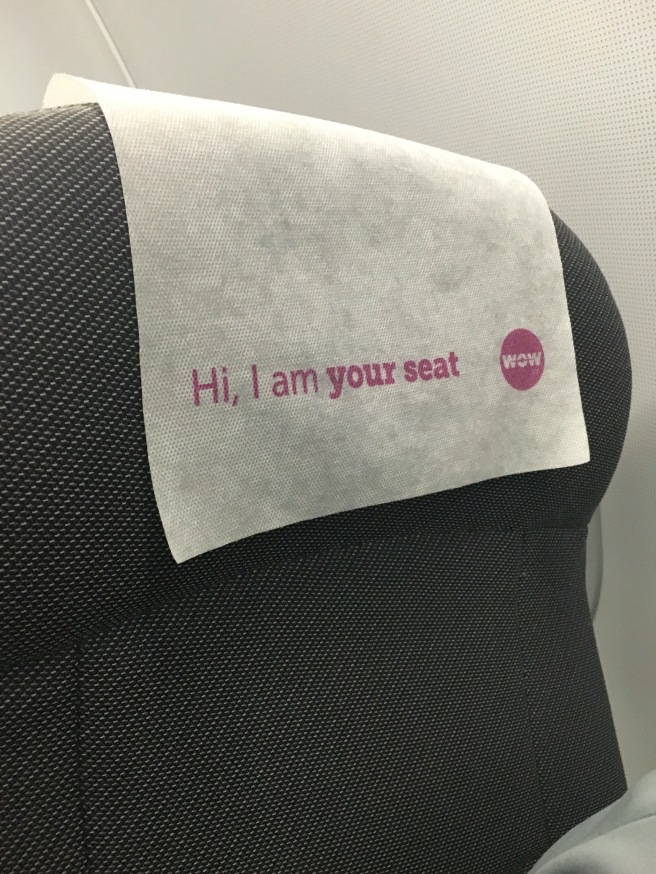 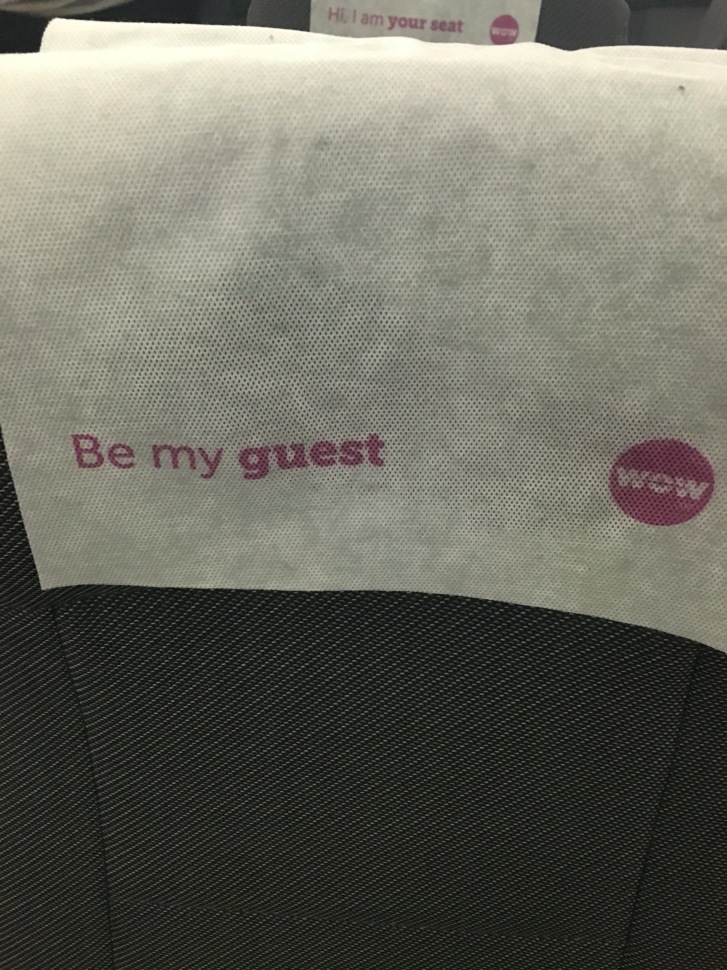 Then, at about 3am, OD woke me up…we could see the Northern Lights out the window!  I was hoping this would happen, and I knew we were on the correct side of the plane to see them, but you never know so I was so excited that they were there.  I am sure they pale in comparison to some other views of them, but for me they were awesome!! 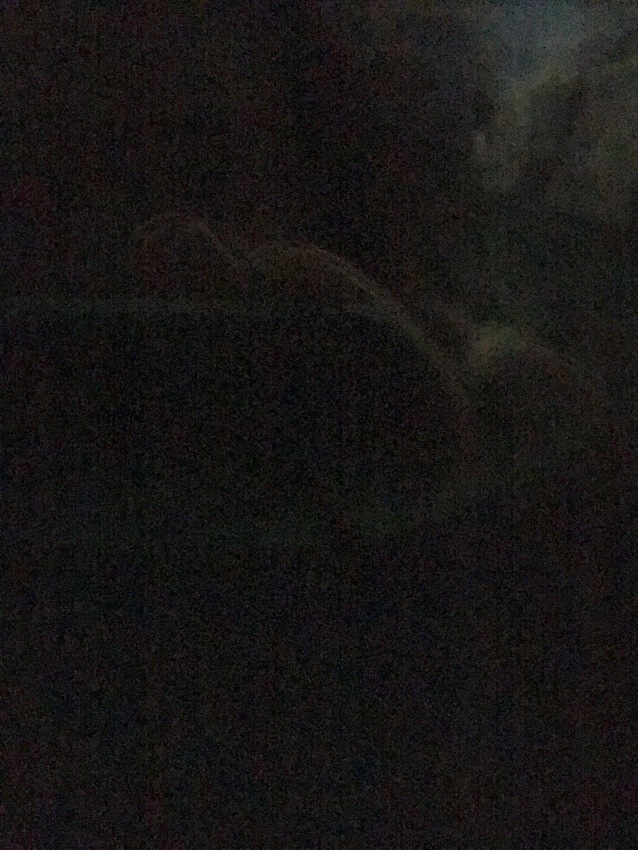 The pictures do not do them justice at all, but what can you do through a plane window on an iPhone, right!!

After that, we landed at Keflavik, had a short layover and then on our plane to London’s Gatwick airport where we made it through customs, baggage claim and onto the Gatwick Express (where we accidentally got on the First Class car, but no one checked our tickets) off at Victoria Station and on the tube to our hotel in Paddington.  We arrived in our hotel around 11:30 so it took us approx. 90 minutes from landing to hotel.  Not too bad!

Next…we have to stay awake!