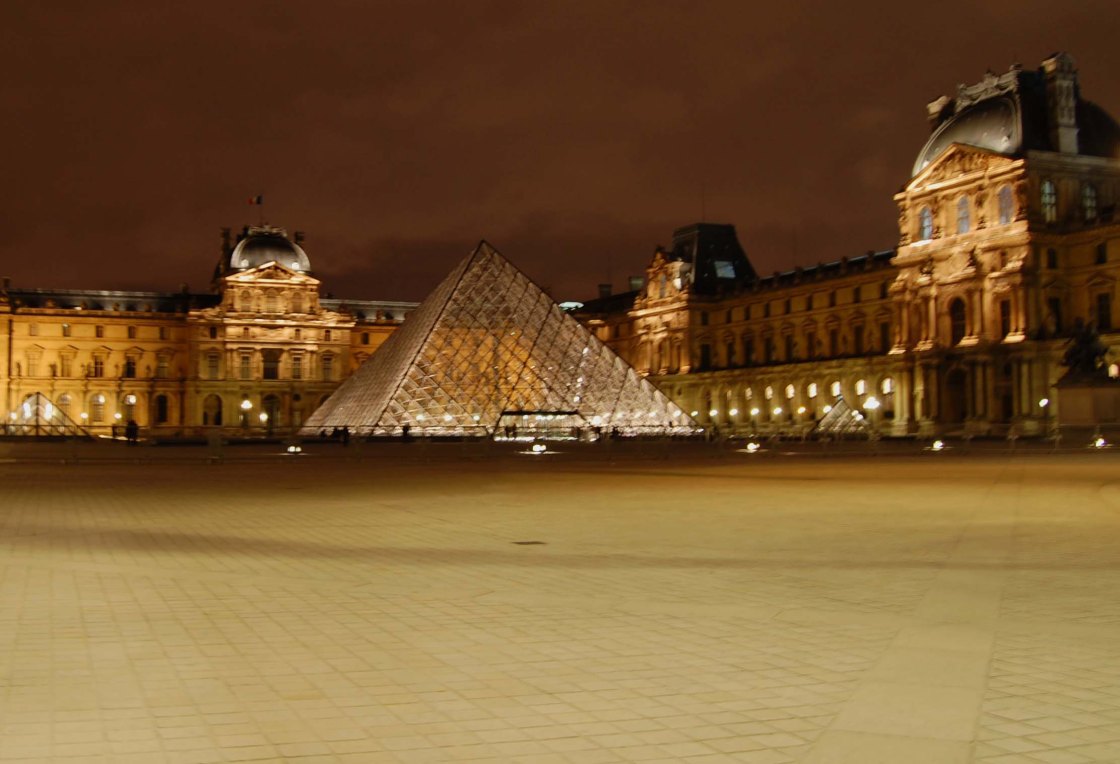 Wow Airlines, A Week in London and a Day Trip to Paris! Part 3

So if you have read any of my previous posts, you may have grasped that Paris is my favorite city in the world (of the ones I have see so far.  I do have a couple of bucket list trips coming up, so we will see after that!).  That being said, since we were so close anyway I had to plan a trip to show Jarod the sights.  The earliest Eurostar train I could get from London was 7:01am and we were told to be there 45 minutes early to check in through customs.  Since we still were not acclimated to London time, getting up at 5am to take the subway to St. Pancras train station was not as hard as it might have been otherwise.  Still, we got to the train station right at 6:15am, officially “left” the United Kingdom, walked 10 feet and officially “entered” France.  The lines were long but moved quickly and as soon as we were through security and customs we walked right on our train and sat down.  This was, however, January.  Not a typically busy tourist time, so if you are making this trip at other times, your mileage may vary.

We had standard carriage seats, no first class on this trip, but they were adequate for what we needed.  Plus, it was only a 2 hour train ride, in the dark, very early in the morning.  It was fine.  The darkness meant that we did not see the presumed picturesque country side passing by on the English side of the Channel Tunnel (Chunnel), nor did we even notice when we entered the famed crossing.  On exiting the tunnel in Calais, morning had broken but the fog was so thick we saw barely anything of the French countryside except the very unwelcome sight of snow covered land.  The fog did eventually clear as we got closer to Paris, as did the snow on the ground.  I knew that it would be chilly, it is January after all, but I was hoping for clear, which I got…eventually.

So we arrive at Gare du Nord at 10:15am (2 hour train ride plus 1 hour time change) and we now have until 8:30pm until we need to be back at the train station to allow 45 minutes before our 9:15pm train back to London.  So, can you see all the highlights of Paris on foot in 10 hours?  Yes, you can…mostly.  And you can’t really go inside any of them for too long, but you can see them all and get some great exercise along the way!  Here is a Google Maps snapshot of my planned path, with the major places I wanted to hit.  I did make some adjustments to this, but followed it pretty closely.  The big gaps from the top to the bottom and back up again, we hopped on the Metro, everything else, we walked. 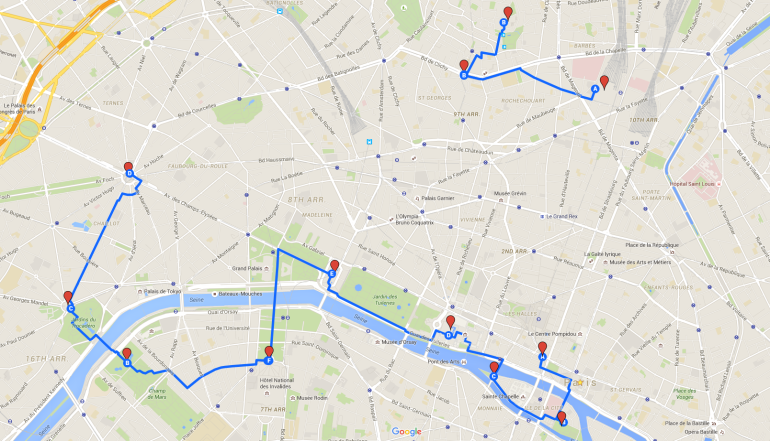 So from Gare du Nord, we headed to Boulevard de Clichy to see Moulin Rouge. 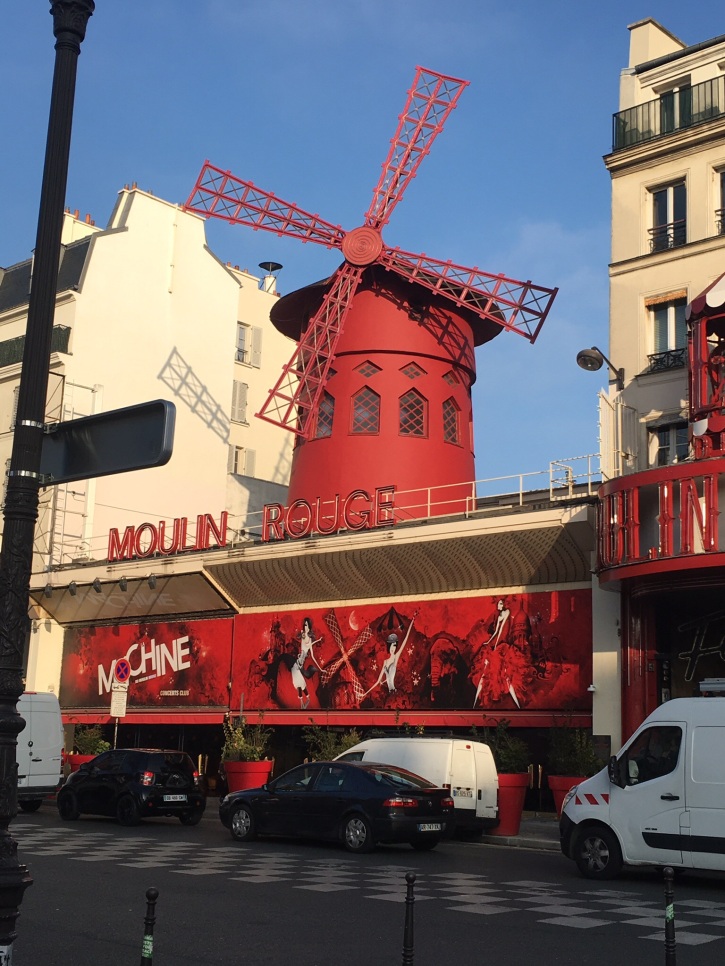 We then headed up to Place Saint-Pierre to catch the Funiculaire to ride up to Sacre Coeur.

It was still a bit foggy so the beautiful view of Paris at your feet that I so wanted Jarod to see was not happening, but as you can see behind Sacre Coeur the sky was beginning to turn a beautiful blue as the morning fog cleared.  We were just too early to catch that site…and we had to keep moving, moving, moving!

So we hopped on the Metro and rode down to Hotel de Ville.  We came up out of the metro and immediately Jarod was caught up in the magic of Paris architecture.  I could tell that he was going to love this city as much as I do! 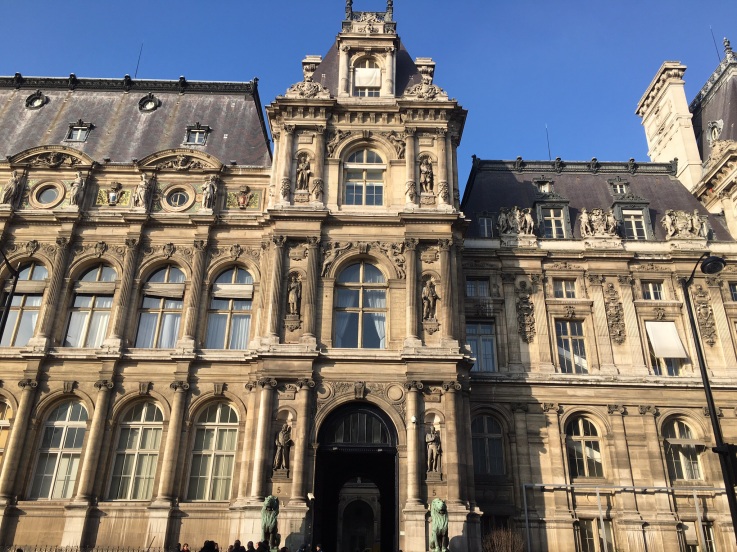 We walked across Pont d’Arcole to Notre Dame.

And stood in Awe.

We then wound our way around Ile de la Cite and crossed back to the Right Bank on Pont Neuf.  If you have read any of my previous Paris trips, you will know that there had been some issues with the “Locks of Love” attached to Pont des Arts and the French government was going to remove all of the locks in order to maintain the structural integrity of the bridge (a positive thing!). However, the people so love the locks that instead of just getting rid of them, they were moved to Pont Neuf, a much more robust bridge, where there is less worry about the bridge collapsing under the weight of all the locks.  This has also created the opportunity for enterprising folks to set up lock selling stands all over the bridge (not a positive thing.). 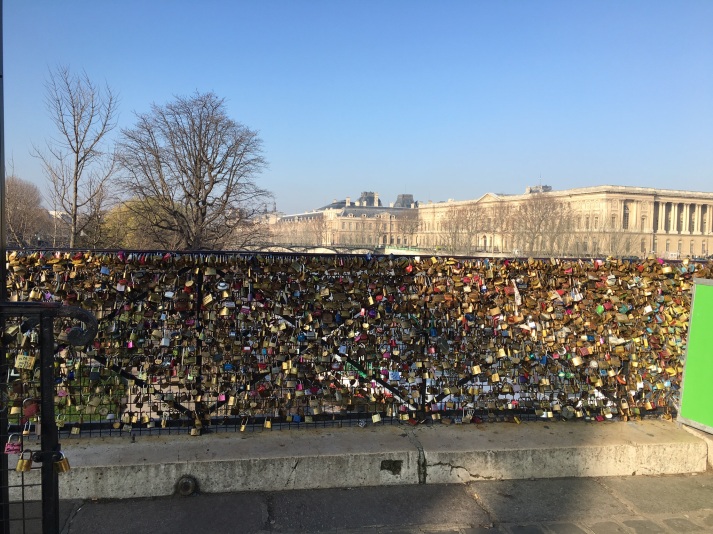 We then stopped and got some coffee and Pain au Chocolat at a cafe along Quai du Louvre.  We entered the Louvre at Perrault’s Colonnade, which is my favorite way to enter as the architecture is stunning and you are able to almost picture, in the Cour Carree, how this area was used originally.  Then you walk through the archway and are faced with the iconic glass pyramid.

The terrorist attacks in Paris had not happened all that long before our trip and the increase in police presence was most notable here.

We wandered the grounds here, peeked in the windows of the Hall of Statues then made our way to the marble arch that marks the entrance to Jardin des Tuileries.

We walked the length of Tuileries and arrived at Place de la Concorde.  I love this area.  It is easily one of my favorite places to sit and get an espresso or glass of wine and just watch.  There is always something happening here, I’ve seen fashion shows, photo shoots, weddings, celebrity sightings, any number of interesting things.  This is also where, more than anywhere else in Paris, I invariably encounter gypsies.  It has happened so many times to me at this point I can pretty much pick them out of the crowd and simply avoid them.  In January, however, it did not seem so many were around.

The Luxor Obelisk…and a weird thing they are building in the background.

The Fontain des Fleuves…frozen solid.  One of the coolest things I have ever seen!  We hung here a while, just watching all the activity, but then had to move, move, move!!!

We crossed the Seine to the Left Bank on the Pont de la Concorde and headed towards the Hotel National des Invalides and Napoleon’s Tomb.  As per the norm, there was a protest going on right outside the Museum of Military History so we wandered around the back way.  There was a checkpoint with a metal detector at the entrance that was not there before, but we went through easily and were waved on past by the armed…yet super friendly…guards. 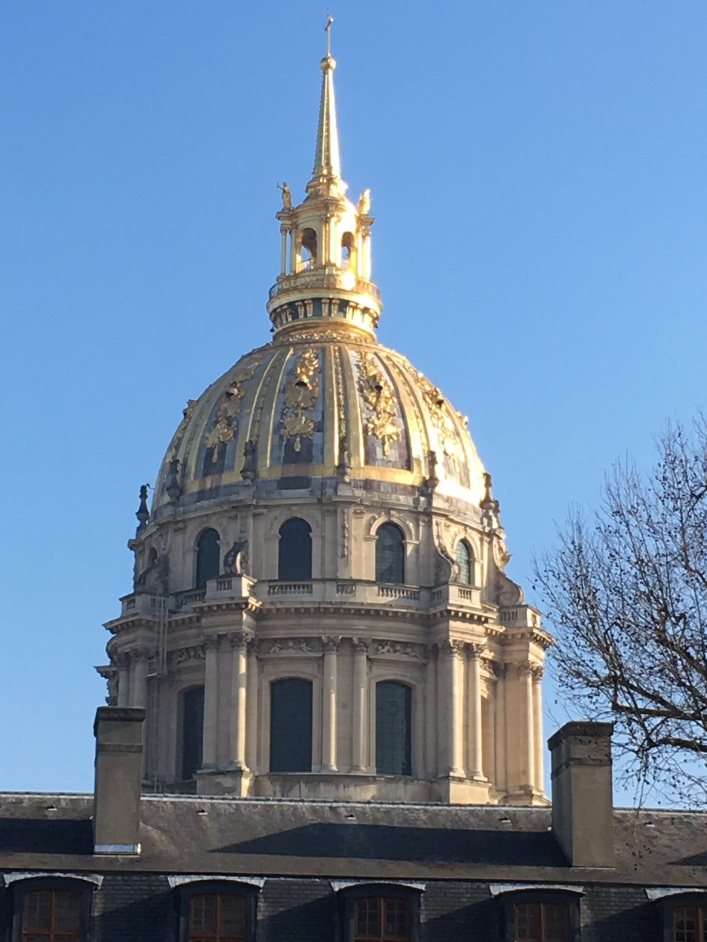 We walked the grounds there for a while, then crossed back over the Seine on Pont Alexandre III, a truly impressive bridge that brings you to the roadway right in between the Grand Palais and Petit Palais.  From there we walked up Avenue des Champs-Elysees, stopping every now and then to peek at some high end stores along the way!

We eventually made it to the Arc de Triomphe.  We were actually ahead of schedule so we decided to go up to the top and see the city from there.  Until we got in line to get tickets and were informed that the elevator was broken and we would need to walk up to the top if we wanted to go there.  Needless to say, we decided we were already walking enough for the day, so we decided against it. 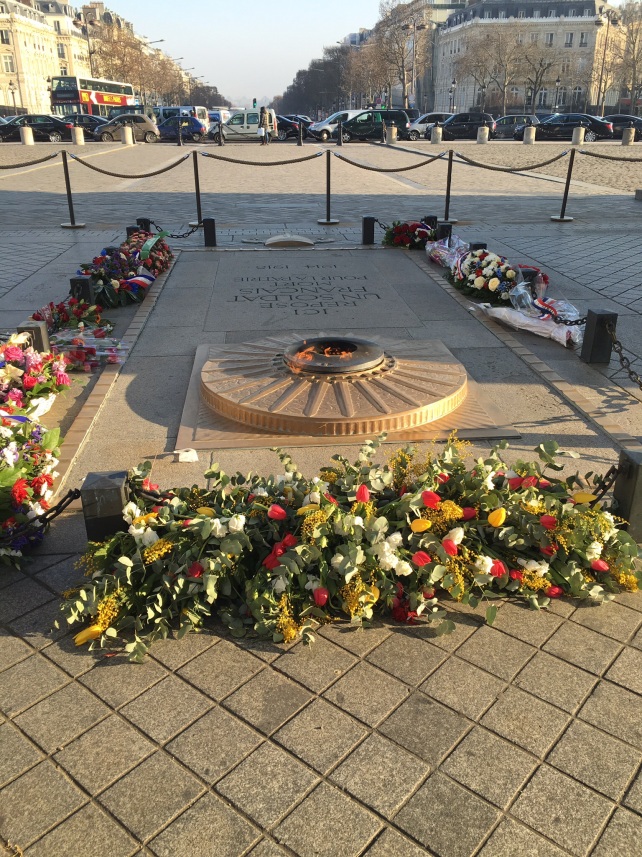 After that, we walked down Avenue Marceau, across the Pont de l’Alma and over to the Eiffel Tower.  I wanted to be over near the Eiffel Tower towards the end of the day hoping that we would be able to see it after dark and all lit up which we did…eventually!

By now it was close to 5pm and all we had had to eat was that Pain au Chocolat waaaayyyyy back at Notre Dame so Jarod was getting hungry.  I was hoping we could hold out a little while longer, but he can get crabby when he’s hungry…must get that from his father!  I had already picked out which restaurant I wanted for him to have his first dinner in Paris so we headed towards the Trocadero to eat at Cafe Le Malakoff.  If you have read about any of my previous trips to Paris, this may sound familiar, this will be the third time I have eaten here on three separate trips to Paris.  What can I say, I like it.

And so did Jarod!!  Every thing he ate was declared “the Best Ever.” He had escargot, Steak Frites with Bearnaise sauce for both the steak and the frites, cause that’s how we roll!  Then Profiteroles for dessert.  A sip or two of my wine, and a cup of true French coffee to end the meal.  I had one of the prix fixe menus which included Gratinee a l’oignon (French onion soup…but since we were in France…just onion soup!!), a filet with Bearnaise and Coupe Dame blanche (vanilla ice cream with chocolate sauce and almonds) for dessert.  It was a fantastic meal and I am so glad we were able to have dinner there.

After dinner, the sun had set, so back to the Eiffel Tower to see it all lit up!

Since we had some extra time, we hopped on the Metro up to the Opera National de Paris.  This stop was not on the map, but we love Phantom of the Opera so since we had the time, it was nice to see the opera house it was loosely set in.

Then back on the metro to head back to Gare du Nord.  We were still early for our train, but after more than 10 miles of walking (and a bit of shopping in the train station for chocolates and skin products), it was nice to just sit.  As it was on our trip to Paris, the train ride home was mostly in the dark and we arrived back in London at 10:40pm to do nothing more than make our way back to the hotel and crash!  It was an amazing whirlwind day in Paris and I am so glad we pulled it off.  We did miss some things, but that is all the more reason to return!

Tomorrow…We join back up with Nick at Free London Walking Tours for the Royal London Tour with the Changing of the Guard.