Because I spend quite a bit of time in the casino when I cruise…and because I don’t often win…Royal Caribbean sometimes takes pity on me and gives me certificates for free cruises.  These are not big, fancy week long cruises on their big, fancy ships.  They are usually 3 or 4 day cruises on the older, smaller ships…but hey! They’re free!!

I had booked a cruise for February and wanted to take my father for his birthday (his birthday is really in October, and I made him a really cool card!) See:

But then…In January, he found out that his work would not give him the time off so my brother got the spot instead.  (Dad gets a much better cruise later on, but you’ll have to wait for that one!)  So that is the first Majesty cruise.  A three night trip to Nassau and Cococay.  Certainly a quick trip, but Port Canaveral is not too bad a drive so easy enough for a weekend get-away

Then, I got another certificate in the mail for a free cruise so I hatched a plan to use this one for bribery!  I needed to pick up my son from college in Ft. Lauderdale and move him back home for the summer.  I drive a SUV, but my BIL drives a BIG SUV!  So I thought, “If I take him on the cruise, he will go with me the rest of the way from Port Canaveral to Ft. Lauderdale, help me move the kid out of the dorm, then we can split the drive back home!” It was a genius idea!  But that’s not how it worked out…It was even better than that!

You see, while we were on that first Majesty cruise, my brother earned a certificate for money off a future cruise so we decided to book a second cabin for the May four night cruise and bring Katie along as well!  Then I was able to get Jarod to convince a local college buddy to store some of his stuff over the summer, so now I didn’t need the big SUV.  It all worked out really well, mostly!

So since both cruises went to the same places, on the same ship I am going to combine them into one review…that may or may not work but we’ll see how it goes!

First up, a quick pit stop at Grills Seafood Deck & Tiki Bar. Why? Because boarding doesn’t start until 11am so what else are you supposed to do?  Everyone needs a pre-boarding drink!  And a quick picture!

The Majesty of the Seas is an older, smaller ship in Royal Caribbean’s fleet.  But they have made some upgrades, most notably on the pool deck where the addition of water slides was a big hit with the Under Six member of our party!

Another big hit with the Pre-K crowd was our stateroom attendant’s mastery of the famed “Towel Animal” left in the room after evening turndown service.  I am lucky that I have always had really good stateroom attendants and these two cruises were no different!  Here is one of our nightly visitors!

As a quick side note…I left those sunglasses on the plane ride to Barcelona so if you flew American Airlines last month and found those awesome Minnie Mouse glasses in the seat pocket, can I have them back please?

But back to the Majesty.  Our itinerary was the same on both cruises but in different order.  In addition, the four day cruise also had a day at sea, while the three day cruise just had the port stops.  So first up…Cococay, Bahamas.  Royal Caribbean’s private island.  This is a tender port, which means you have to get off your big ship, onto a smaller ship in order to get to the island.  Really like a water taxi service.  Because of this, tender ports are susceptible to weather disruptions and are often missed.  We had amazing weather on both cruises so we were able to visit twice.

Here is what the Majesty looks like from the tender boat.  The water around the island is not deep enough for her to pull closer so she really does have to park a bit away.

And that little boat by her side that looks like a barnacle is one of the tenders.  But they really are a nice little ride, provided the water is not choppy.  You can see our seas looked like glass. Nice and smooth!

And here is a little part of the island.  This has been totally built by Royal Caribbean so everything and everyone on the island works for the cruise line.  This makes for a nice sanitized day at the beach, which is great and I really like Cococay, but sometimes I miss local flavors and stuff like that.  Still, it is beautiful.

We had some cloud cover as you can see, but it never rained.  A newer addition to the island is the floating bar.  Basically a tiki hut that floats by the shore.  It is connected by a giant chain so if the water gets rough, they can reel it in. 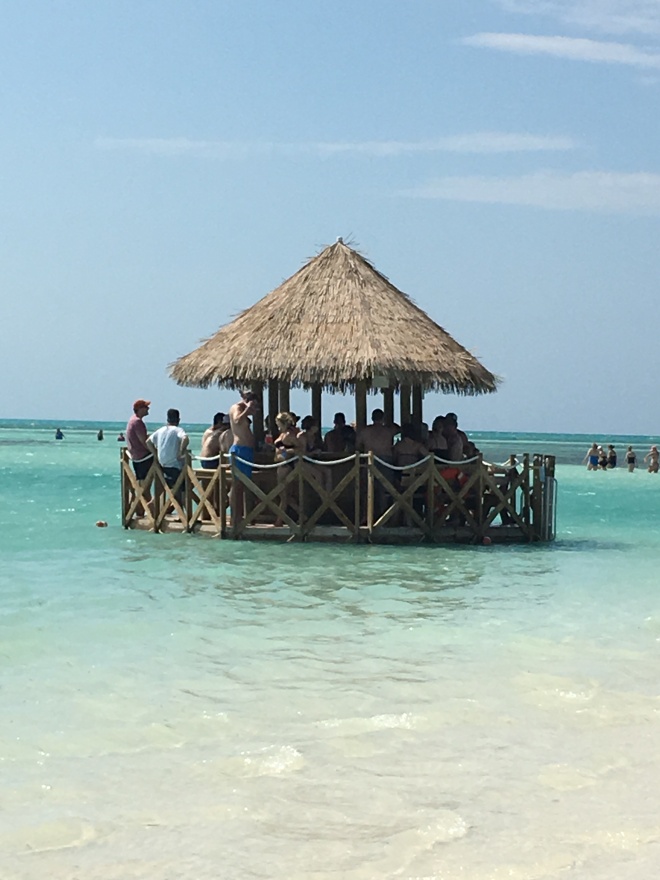 It does have a limit on how many people can be on it at one time…presumably so it doesn’t sink…so they kind of do a “one off, one on” scenario once it gets full.  I haven’t actually been out there yet, but it certainly looks cool!

Next up, we headed to Nassau.  If you have read my previous review of Nassau, you may grasp that I have not had the best of luck there! So sometimes I don’t even get off the ship anymore, but this May I had a goal…Pirate Republic Brewery.  It is right by the port and I love tasting local beers so that was my mission.  In addition, the beach soccer world cup was going on that week and while the day we were there was the rest day, so no games, I did want to see if I could find a t-shirt or something from the event…It is Soccer Mom Travels after all!

Looks like we got the best parking spot!  And look!!! Right there!!  Pirate Republic Brewery!!  How close is that!!

Off we headed to find soccer stuff then stop for a nice frosty local beer…ah the best laid plans.  Seems I have no luck in Nassau at all.  We tried to get a taxi over to the stadium since the vendors were telling us that the only place that would sell t-shirts like that were over at the stadium, but then the taxi driver said that the vendors wouldn’t even be open because there were no games.  Sigh.  Okay so that plan is shot…at least I still have my frosty local beer to look forward to, right??

While I heartily applaud the policy of not drinking and voting, this would once again add to my luck in Nassau.  So once again I am leaving Nassau without doing any of the things I actually planned to do.  Lucky I still have two more trips scheduled with stops in Nassau.  I will get to you yet Pirate Republic!

Overall, I really do like these short cruises on the smaller ships.  I am very lucky to live within driving distance which makes it possible to do these.  Next up?  Freedom of the Seas in the Western Mediterranean.  Spoiler…Yes, it was as awesome as it sounds!

Quantum of the Seas – Asia