In the days leading up to this cruise, Turkey had a failed coup attempt.  With that in mind, many cruise ships were skipping or replacing stops in Turkey with either a sea day, or another port in the area.  Our cruise had made no announcement as to what the plan was at that point, and when asked, the officers stated that they were monitoring the situation and would let us know, but the plan was to stop in Turkey and in fact, Royal Caribbean had collected all non-EU passports per the Turkish governments request (standard procedure even before the coup attempt).

All this to say that until the day before our port stop in Kusadasi, we still had no idea if we were stopping or not.  I had reserved a taxi service through Taxi Service for Ephesus to take us from the port up to Ephesus.  I was wary of joining a traditional tour because I did not want to get bullied into a “demonstration” that often turns into a hard sell.  I had read that most organized tours have a stop either at a carpet weaver or a leather shop included in the tour, and in fact all of the ship sponsored tours had this included stop as well.  The carpet weavers in Turkey are some of the best in the world, but lets be honest…who has room in their luggage for carpeting?

So instead I reserved just a taxi to meet us at the port, drop us off at the top gate to Ephesus, and come back a few hours later and pick us up at the bottom gate.  I made the reservations via email, the price was agreed upon in advance and Hasan was very responsive and easy to work with.  In addition, his English was nearly perfect and I have no reservations recommending this company should you ever find yourself near Kusadasi port.

It is a beautiful port area, hills rising steeply from the ocean with condos/apartments/hotels built all up the hillside.  That little tiny island out there?  Well that is the namesake, the actual Kusadasi – Bird Island.  Here is a better picture:

There are shops and restaurants all along the pier so a very easy port to navigate by foot if all you are looking for is nosh and trinkets.  We however, were headed to Ephesus.

We walked out of the port area past armed guards.  We were told that we were the first cruise ship to stop at Kusadasi since the failed coup attempt, only 16 days prior.  It was very clear that the merchants were happy to have us (tourists) back.

At the taxi stand, we met Hasan and he directed us to our driver for the day.  He ensured that we had his number and knew how to reach him if necessary.  While Hasan’s English was excellent, our driver’s was not.  He tried really hard and he was so nice though that we hardly minded.  Ephesus is about 30km from Kusadasi through some lovely countryside.  Our driver pointed out some other local attractions along the way and tried to teach us the names of some of the fruits in Turkish!

When we reached the top gate, our driver found a friend that spoke English and we arranged a time to meet at the lower gate for pickup.  Our driver assured us that if we happened to be a few minutes late that he would certainly not leave us stranded!  We also purchased a guide book and some water…it is HOT in Turkey in July and we would come to find out, not much shade in Ephesus. 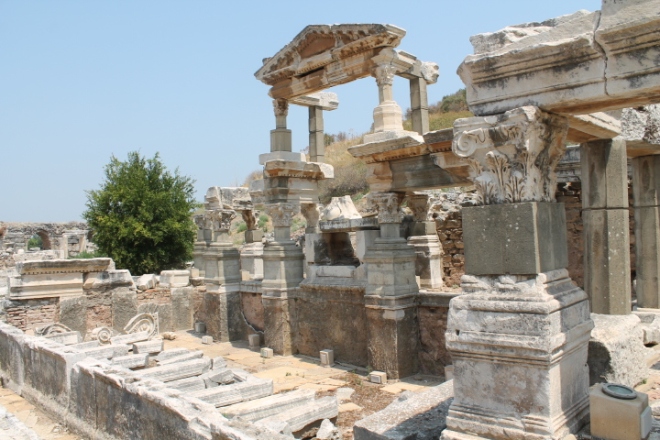 So these ruins are a bit different than the ones in Athens or Olympia.  These ruins are being actively restored.  They are only using the original pieces that they find so different buildings are in different states of, well ruin.  The other thing that I love about Ephesus is how accessible everything is.  You can walk in, around, and through almost all of the building sites.

We added the Terrace Houses to our admission.  These were the houses of the wealthy citizens of Ephesus and are currently being excavated and restored.  As we were there on a Sunday, no one was working but evidence of excavation was all around.  And the houses themselves were incredible! 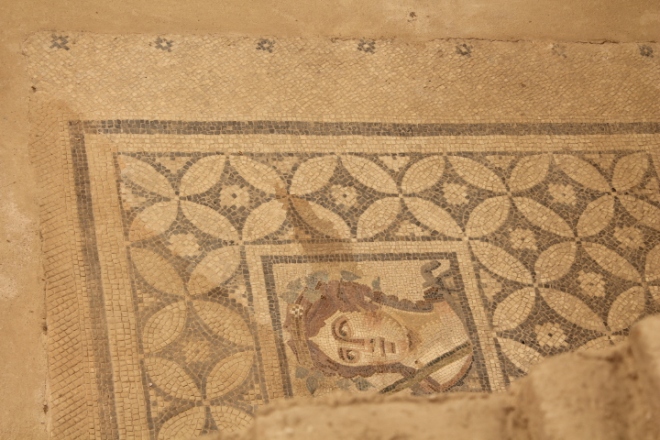 The color on the walls and the mosaics on the floors are so remarkably preserved.  It was an awesome thing to see and if you are ever in Ephesus, make sure you take the side tour into the Terrace Houses.  It is hot and there are a lot of stairs, but it is worth it!

Coming out of the Terrace Houses, you arrive at the restored facade to the Library of Celsus.  Its Stunning.

This two story library was home to thousands of scrolls (you know…what books used to be!) making it the third largest library in the world in its day.  This building has been restored somewhat. But since they will only use original parts for restoration, it is never going to be fully restored.

Nearby is the Temple of Hadrian…we seem to have seen a lot of stuff dedicated to this guy!

And of course, my favorite…the theaters!  There are several in Ephesus from smaller ones used for Senate meetings and such:

I’ve heard that this guy Paul lived here around 50AD for a few years.  He gave daily talks to scholars here.  Those talks eventually became “Ephesians” in a pretty famous book…that’s impressive stuff!

To the massive ampitheater used for concerts as well as gladiator battles and other community building exercises!!

This one seats approximately 25,000.  See that little black dot?  That’s my son.  He climbed all those stairs!!  I did not, in case you were wondering!!

The Commercial Agora is where business got done.  You can see in this picture the parts that have been unearthed but not restored to actual buildings. 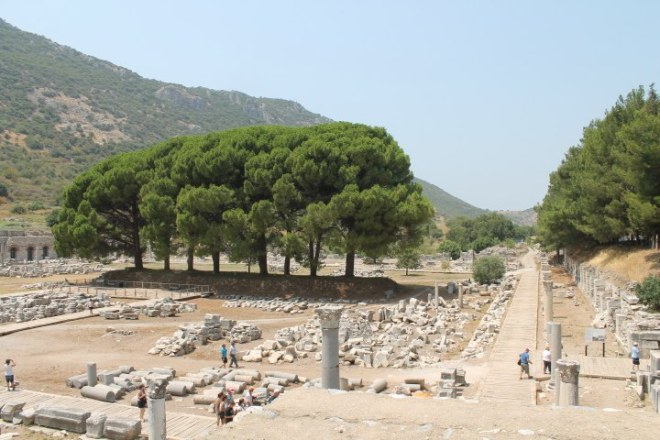 So after a very warm yet amazing trip through history we made our way out the lower gates to meet our driver. If you EVER make it to Ephesus, take note: start at the top and walk downhill! We passed people going the other way and they really looked like they would welcome death. Remember it is hot…very hot. And there are no trees or shady spots to rest. Add to that an uphill climb and I can totally understand their open arming the grim reaper.

But forwarned is forarmed so we worked with gravity and not against it. And as we made our way out of the historic site, we invariably walked into vendor central. These guys are well aware of the demographics of their clientele and proudly touted their stock of chilled water bottles…or the one that won our hearts (and dollars) air conditioning!

One of the traditions we have as a family is that whatever country we visit, we buy the national team soccer jersey. So we were in the market for a Turkey jersey and as it happened, he had the air conditioning also!!
I find that very often I am faced with the stereotype of a woman not knowing her sports. This was very apparent in Turkey and I was VERY amused proving him wrong!! He took it in stride and in fact gave us a great deal on the jerseys once I proved my knowledge!

So having gotten our fill of history and our quota of Turkish soccer jerseys, we headed back to the port with our driver who was exactly where we said he would be waiting.

Back at the port we stopped to shop a bit and get something to eat. We had some of the best calamari I have ever had and when we stopped the owner to compliment the food, he simply pointed to the the water and said, “Of course it’s good. I caught it right there!”

All in all, this was our favorite port so far and I am so glad we stopped. I would go back for a land vacation without hesitation!

Back on the boat, we visited our favvie post port bar for Aperol Spritzs. Our next port is Santorini.

Could it really be as awesome as everyone said??