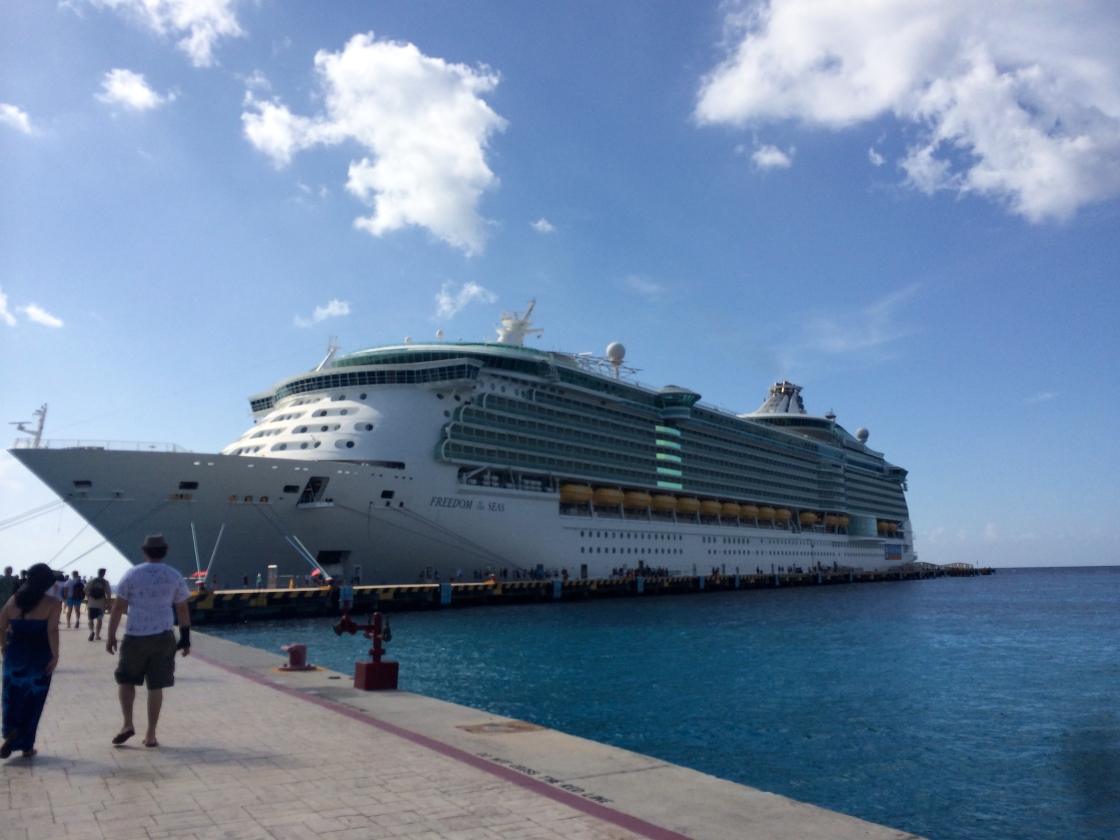 Back to the Future…Um Freedom

So it’s no secret that I love to cruise. I love the ease of having something for everyone available at any time. I really love traveling with family so I often need entertainment for multiple generations and cruising is the best way I’ve found to do that.  So. Having done the Eastern Caribbean only once in 2010 and having then done the Western route twice since then, once on Freedom, once on Allure, I decided it was time to head back to the Eastern side.  And since everyone liked the Freedom more than the Allure we picked a date and made reservations.

For this cruise, it would be me, OD, TJ, M&P, KT, Grandma and OD’s girlfriend, GF.  This would be GF’s first cruise ever.  She had just finished (successful) treatment for thyroid cancer so this was a great way to celebrate that.

Leading up to the cruise was a HUGE roll call on Cruise Critic.  Unbeknownst to us, this was going to be a reunion cruise for a large group that cruises together every year.  In addition,  Back to the Future Day would fall right in the middle of this cruise and everyone on the roll call board thought that would be a fantastic theme for the cruise.  We had shirts made and everything!!

These turned out to be the highlight of everyone’s cruise!  EVERYONE asked where we got them and it became something of a badge of honor to have one!  We even made one for the Captain!  Of the 8 in our group, 6 of us had these shirts (no kids sizes available for KT and they really aren’t Grandma’s style!) and we wore them on embarkation day.  So onto that!

Since there were so many of us going, we had to take two cars and since I love to visit places but I hate to drive we left on Friday after school and drove as far as Savannah, GA (just about halfway) where we stayed in the Double Tree Savannah Airport.  They have 2 room + sofa bed suites so there were 2 king beds plus a sofa bed.  Plenty for the 4 of us.  My car carried: me, OD, TJ and GF.  Mike & Peter were coming down a day later with KT and Grandma.

After an obligatory breakfast at Huey’s for beignets with homemade praline sauce (YUM!!) we were headed to Port Canaveral for our pre-sail meet up with the “Back to the Freedom” gang.  We arrived in Port Canaveral and headed straight for Fishlips to meet everyone and watch the Saturday sail away’s from the upper deck.

Then we were off to check into the Hampton Inn Cocoa Beach and wait for the second car to make it down.  They were leaving home on Saturday and driving straight through to Port Canaveral.  Not a terrible drive, 8 hours or so, but since we have already covered how much I dislike driving, splitting it up makes me a happier traveler…and beingnets!

On Sunday we were up and moving pretty early…NOT due to the excitement of the day.  TJ had apparently eaten something that did not agree with him and he was sick sick sick all night…it was bad…I tipped housekeeping A LOT.

But eventually we were on our way to check-in.  I was parking at the port, but Peter wasn’t so we worked it out so he would drop off luggage and people, then head back to the hotel, where he was parking and I would meet him there and take him back to the port and park.

FINALLY we were ready to check in!  We had all our paperwork ready to go and check in was a breeze.  It feels like we waited forever for boarding to start, but it couldn’t have been that bad because KT was changed and in the pool by 12:30 and I am SURE we all had drinks in hand by then!!

So next up is the Muster drill.  TJ was chosen to be the example…or horrible warning depending on how well you know him!! 🙂  He did a fantastic job being the center of attention and off we went feeling much safer, thanks to him.

As we sailed away from the port, the weather was starting to turn a little gray and overcast.  But we had a dolphin escort so I knew everything would be fine!

We were staying in an Oceanview cabin, two twin beds and a pullman for the third person.  In my cabin: me, TJ and GF.  OD and Grandma were staying in a balcony cabin and Mike, Peter & KT were in an Interior (when you book late you have to take whats left!) all on different decks.  I don’t think I would stay in a cabin with a pullman bed again.  If I need more than 2 beds, I will go with the sofa bed option.  TJ was in the pullman and his pillow kept falling off and onto my head in the middle of the night!  Here is what our window looked like…with a 4 year old for size comparisons!!

You can kinda see behind KT that the seas were starting to kick up a bit…that would continue for a while.  In fact, we would miss Coco Cay because it was too rough to tender.  A shame because I really love Coco Cay and Grandma, GF, Mike & Peter and KT had never been there before.  Still…an extra sea day to get our money’s worth from the drink package!

And here we are sailing past Coco Cay.  It really is a beautiful island, my favorite of the RCL private islands.  The water stayed pretty choppy for the whole of the next day.  I was on deck 3 and the waves were at eye level.  GF didn’t feel so hot, I had brought bronine and sea bands just in case so she tried those and felt better…eventually she found her sea legs (and the seas leveled out).  None of the rest of us had any trouble with the rocking and rolling, we could certainly feel it.  It was without a doubt the roughest seas I’d ever been it, but most all of the outside decks were closed so it was certainly noticeable.

Monday was a sea day, and the seas were rough so everyone found stuff inside to do, plenty of shows, shopping, eating, arcading, karaokeing, drinking and donating to the future ship fund (casino) kept everyone busy and happy!  In addition, we were going to get a couple of extra hours in St. Thomas since we would get there earlier than planned.  More on that later!